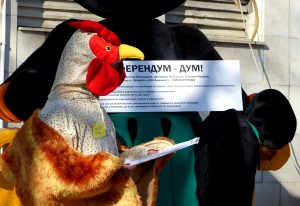 A petition from our new  gabrovian  association  REFERENDUM – DUM!:

The referendum questions were formulated during the carnival season opening on November 11, 2016, at 11.11. Everyone can find the subscription book in the Museum “House of Humor and satire’’  and on schedule also in other institutions.

Everyone can sign up with finger print, color by choice.

The Mayor of Gabrovo – Mrs Tanya Hristova and the Regional  Governor of Gabrovo district  Mr. Nikolay Sirakov were amongst the first to support the referendum-dum-a. The petition was supported also by a number of gabrovians, public and socially active people .

The fifth season is the carnival and it is already here. Now we start counting the days until the beginning of Carnival 2017. The motto ‘’Da izkukurigame ot smyah’’.